A true beer geek always knows how to capitalize on a business trip that takes them even remotely close to a great brewery, and such was the premise behind my first-ever visit to Industrial Arts Brewing Company in

Rockland County.  Thinking I knew the name of every town in the Hudson Valley’s 3rd most populous county, I had to actually look at the map to see where Garnerville was.  Ah, between Thiells and West Haverstraw! Now I could get a fix on the place and figure out the shortest route there from Mahwah, where I had gone to attend to some post-race business from my Rock The Ridge event, which was held the previous weekend.

Following Rte 202 virtually all the way there, I made a final right-hand turn onto W. Railroad Avenue and began looking for the brewery building’s distinctive tall brick smokestack.  But even having IDed the building, finding the way into the place was 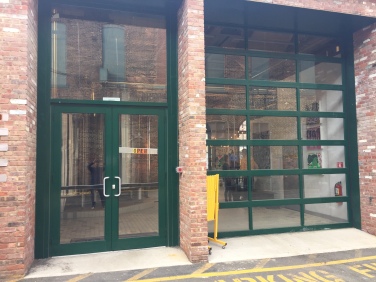 a challenge. Although if you’ve been around to a lot of the breweries in the Hudson Valley, you’ve probably noticed that some of them are in very nondescript buildings, and have little signage out front to welcome you with.

And such was the case with Industrial Arts. There is no sign or welcome mat at the front, and I almost made the mistake of walking through an open door and into the service side of the bar. But seeing the bartender’s back to me made me realize the error, and I eventually found the virtually unmarked front door, tagged only with a small sign on metal stripping that said “open”.

The space inside is clean for an industrial building, and high-tech in look and feel. With high ceilings, the place is remarkably spacious to the eye, despite the fact that the brewery equipment – which is sufficiently cordoned off by a metal and wire “wall” –

occupies at least half of the floor’s square footage.

True to its name and brand, the place oozes the word ‘industrial’, from its exposed iron I-beams to the fitting names that brewer Jeff O’Neil has given to his marvelous malted concoctions. With beers called Hard Hat, Safety Glasses and Power Tools, I could hardly wait to belly up to the bar and start trying them!

Intrigued by all seven options on the beer list (which was affixed to the brick wall of the brew house on a set of metal strips), I opted to try just two today and save the remainder of the menu for another visit. My first go was the Hard Hat, a black IPA that was

appropriately colored and hopped for the style. Rich in flavor but without the maltiness of a porter, this was a great pour. And at 6.7% ABV, it leaves room for a 2nd one even if you have to do the driving home afterwards.

As I enjoyed my beer, I walked around the brewery floor, observing the other patrons and listening to some of the dialogue going on at the bar.  After a bit of a wait, I noted that a seat at the bar was opening. In my extremely humble opinion, the most perfect way to get a feel for a beer establishment is to be as close to the taps as possible, so I went for the stool before someone could beat me to it.

The bar area itself is fairly unique as breweries go. It presents as an archway in the white brickwork of the southwestern corner of the brew house, which gives the feel that

you’re seeing through a portal of some sort, or perhaps ordering brick oven pizza rather than hand-crafted malt beverages.

After finishing the Hard Hat, I contemplated which of the remaining choices would be my 2nd and final beer for the evening. In quick stead, I settled on the Tools of the Trade, which at 4.8% was easily the most sessionable choice on the menu, and what the brewery calls an XPA.

Although there is no official GABF category for XPA, I’ve read that they tend to fall somewhere between an IPA and an American Pale in terms of style. And I would say that Tools of the Trade is a little closer to IPA than APA, as the hop bitterness was more notable than in any pale ale I have ever had.  Perhaps hops is the “X” (i.e. extra) in this style.

Given that I arrived late and only had time to have two of this great brewery’s offerings, I will have to come back again – perhaps next time with friends – to try the likes of Safety Glasses (session ale), Power Tools (IPA), Metric (pilsner) and others.

When you’re in the area, plan to drop in on Industrial Arts.  And tell them the Beer Snob sent you. 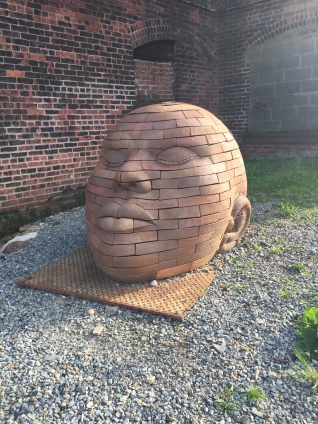