If we closely examine our daily activities, we sometimes (or maybe often) find that a negative circumstance is the gateway to something positive. And such was the case on Sunday, April 2nd as I sought out a visit to a craft establishment in the New Paltz area after participating in a 14-mile group run in Mohonk Preserve.

Sweaty, tired, and already feeling a bit sore after romping around for 3+ hours in “one of Earth’s last great places”, I needed a fresh glass of craft beer in the worst possible way. So as I pulled out of the Spring Farm trail head parking lot at about 2:00pm, I set my GPS for the address of Yard Owl Brewery in Gardiner. About 20 minutes away, my device told me. I could certainly be patient for that long.

But patience turned to disappointment as I arrived at Yard Owl’s small, industrial location on a remote back street of Gardiner. It was 2:23pm, and the sign on the door i

ndicated that they were open from 3:00pm – 7:00pm.  Not wanting to wait around for nearly 40 minutes, I decided to do something active rather than passive, and I pursued ‘plan B’. It turned out to be a blessing in disguise.

Fourteen miles and 25 minutes later, I found myself arriving at my destination, Hudson Ale Works in Highland, NY. In all of my bull sessions with fellow Hudson Valley beer lovers, this brewery had never come up in conversation, so maybe I would be the one to experience it first, I thought to myself, and then report back to friends. In any case, unlike my previous stop, Hudson Ale Works was open for business, and I was glad to finally be close to that first heavenly taste of malt and hops.

The building itself has a fairly crisp look from the outside, and to my delight, the inside was equal in presentation to the exterior, with caged lanterns hanging above a sleek stone-topped bar, and multicolored wood panels providing an eye pleasing backdrop.

Being that this was a Sunday afternoon, the place

wasn’t too crowded, and I was able to get seated and review the tap list right away.  What I found was a great variety in their tap offerings, and wanting to try them all and still be able to safely drive home, I started with a flight (which at $8 for four 6 oz glasses is a total bargain).  Although customers can choose any four beers, I went with the first four on their list.  My comments about these are as follows:

Coconut Vanilla Stout
Super smooth and very easy to drink, the low hop rate allows the creamy flavor to remain at the forefront. Coconut flavor is evident, but does not overpower.  5.5% ABV

Gose, the Imposa
A great sour, whose name is possibly inspired by the historical Romanian figure Vlad the Impaler. This is a serious sour that leaves its mark. And at 4.2% ABV, on a warm summer day this one could keep your palate satisfied for hours on end.

Monkhe See, Monkhe Do
With a deep amber color and very strong malt profile, this Belgian dubbel (thus the word ‘monk’ in its name) could just as easily pass for a Strong Ale.  8% ABV

WorksAllDay
The Huell hops in this aptly named session IPA immediately impart a notable flavor that lasts on the tongue from start to finish. Coming in at 4.5%, this great beer has a full bitterness profile that is appropriate for the style. Perfect for the everyday IPA lover. 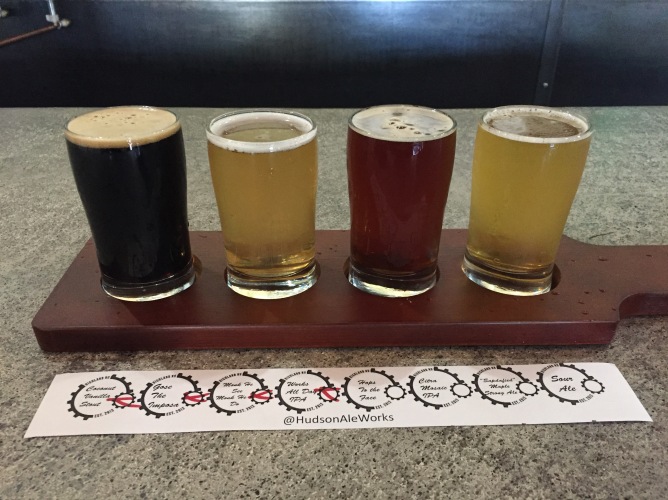 As I worked my way through the flight, I engaged with my server, who I immediately learned was Adam Trapani, one of the three principals at Hudson Ale Works. Adam explained to me that although the brewhouse itself has been in operation since 2013 (with setup costs of likely over $1 million), it was only after a long and expensive renovation that they opened their taproom space in August of 2016.  He went on to explain that in addition to their spacious taproom

(which is actually two rooms), they will be building a 600 square foot patio in the front that he said he hopes to have complete in time for summer.

The interesting thing about Hudson Ale Works is the owner/labor structure. Along with Josh Zimmerman and Neil Trapani (presumably Adam’s brother, although I admittedly didn’t ask), Adam and his partners all identify themselves as both “owner” and “brewer” in addition to the many other hats that they must certainly wear.

After declaring my identity (a beer snob should never hide behind his beer glass, after all), I was given a friendly peek at the brew house, where I was shown the small but active 3 bbl system they use to push out product not only to their tap room, but to their dozens of retail accounts, which are all delivered to by way of a two-tone grey Honda Element (seen in the picture above).

I concluded my session (and visit) with a glass of the brewery’s Maple Strong Ale offering, which they call Supdafied.  At 9% ABV and full of body and flavor, it didn’t disappoint, and is one that I hope will find its way into a can at some point so I can enjoy it at home as well.

All in all, Hudson Ale Works is a great brewery, and I am very confident they will have a bright future here in the Hudson Valley. Pay them a visit when you get a chance.

And for those who caught the Warren Zevon reference in the title of this post, bravo to you! 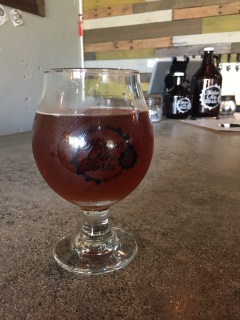